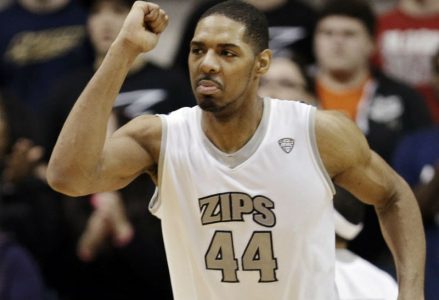 Free Pick on the Akron Zips +3.

I’m recommending a play on Akron plus the points on Friday night. Akron finished the season in sluggish fashion, but had little trouble with this Kent State squad on February 10. The Zips won 61-52, covering a 7-point spread. They completely clamped down on the defensive end, forcing the Golden Flashes into taking and missing tough shots. Pat Forsythe is expected to miss tonight’s game with a foot injury, but the Zips own the tools to make up for their starting center. Forsythe leads five players averaging between 10.7 and 6.4 ppg. I simply expect forward Kwan Cheatham, Jr., to pick up the pace a bit, both on the offensive end and on the glass. The first movement when this line was posted went towards Akron. We happen to agree with the early movement. The Zips enter on a 9-2 ATS run against good teams, those playing better than .600 basketball, while the Flashes have covered just 8 of their last 25 at home. I’m taking the points with the Akron Zips on Friday. Thanks & GL! Scott Spreitzer.

Scott Spreitzer SLAMMED the books with a Tapout winner (Davidson by blowout)! Scott enters on a 37-24 Tapout run. Now grab his top of the ticket release, his CBB CONF TOURNEY TAPOUT GAME OF THE YEAR, a side backed by combined spots on an 18-5 run!