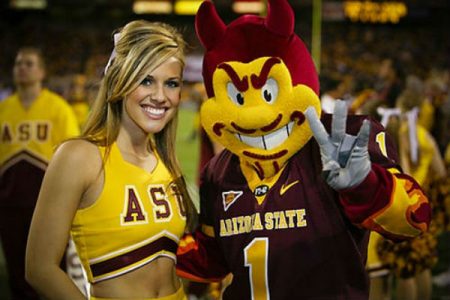 The Arizona State Sun Devils will go on the road for the first time this season as they travel to Texas to take on the Roadrunners at the Alamodome Friday night.

The visitors covered the closing line by a solid 14.5 points when they defeated Texas Tech 68-55 last week. They’ve received huge public backing heading into this contest (close to 75 percent), forcing the spread to move from -18.5 to -20.5. The Sun Devils have covered the spread in each of their last six games but they’re just 1-4 ATS in their last five Friday night games.

The Roadrunners have split their first two games of the season after a 23-14 loss at Colorado State last week. They failed to cover the closing line by half of a point and are 3-12-1 ATS in their last 16 games following a straight up loss. Texas-San Antonio needs to improve its ground game on both sides of the ball as it was held to minus-1 yard rushing while giving up 220 on the ground last week. It could prove troublesome as Arizona State rushed for 301 yards on 53 carries against Texas Tech as running back Kalen Ballage matched an FBS record with eight touchdowns.

Junior quarterback Dalton Sturm has been lively under center for the Roadrunners though, throwing for 450 yards and four scores and he could have a big game against a Sun Devils D that has yielded a Pac-12-most 518.5 yards per game on the season.

The Roadrunners will surely have trouble to stop Arizona State’s high-powered offense, but will the Sun Devils keep pounding once they have a big lead? We think they will, but the value is not great at the current line.