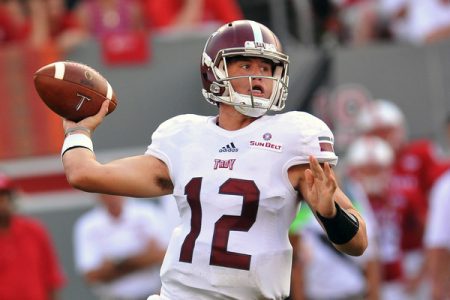 The 5-4 Arkansas State Red Wolves will visit the 8-1 Troy Trojans at Veterans Memorial Stadium in Troy, Alabama Thursday night. The game has a 9:30 PM EST start and will be televised at ESPNU.

The Trojans are 5-0 straight up at home but just 2-3 against the spread, and currently 1st in the Sun Belt conference. Troy opened as an 8.5-point favorite, a number that has not deterred the public from backing the Trojans. Close to 57 percent of the tickets have backed Troy as of Wednesday morning, but the spread has moved in the other direction at market setting sportsbooks 5Dimes and Pinnacle. Almost 75 percent of the wagers are backing total to go over 55.5 points, and four of the last five head-to-head meetings have gone over the closing number.

Arkansas State beat a poor New Mexico State side 41-22 last week. Quarterback Justice Hansen had two touchdown passes and 257 yards passing. The team has won five straight games since an 0-4 start to the season, covering the spread in each victory. Arkansas State is together with Troy the only team still unbeaten in conference play in the Sun Belt.

Troy has lost just one game all season, a tight 30-24 defeat at Clemson as a 34.5-point underdog on Sept. 10. The Trojans defense has been excellent all season in allowing 24 or less points in six of their nine games and an average of 21.6 points per game. The Trojans are coming off a 28-24 win against Appalchian State.

Quarterback Brandon Silvers completed 21-of-35 passes for 229 yards while rushing for 56 yard, including a 51-yard touchdown dash. Silvers is having a big year with 2,308 passing yards, a total of 19 touchdowns and seven picks.

The Trojans are 6-1 ATS vs. a team with a winning record but 1-5-1 ATS in their last seven Thursday night games. Under is 6-1-1 in Trojans last eight conference games but over is 4-1-1 in their last six Thursday games.

Troy owns the Sun Belt this season and it will remain the only unbeaten team in the conference after this contest, covering the spread in a blowout win.