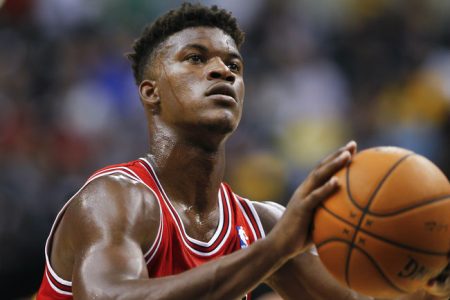 Published April 23, 2015. Check out our Featured for similar articles.

Thursday’s NBA card features an Eastern Conference Quarterfinals matchup between two Central Division rivals as the Chicago Bulls (50-32, 39-43 ATS) and the Milwaukee Bucks (41-41, 46-35-1 ATS) will clash at BMO Harris Bradley Center. This game will be nationally televised on NBATV with tipoff scheduled for 8:00pm EST. At the time of this preview the Chicago Bulls are the favorite in this game by 2.5 points with the total set at 187 points.

Chicago has dominated each of the first two meetings in the series at home winning  103-91 and 91-82. Jimmy Butler has torched the Bucks with 56 points over the two games combined and he set a personal playoff high with 31 points in Monday’s 91-82 win. He’s had help from Derrick Rose who has shipped in with a total of 38 points as well as holding Michael Carter-Williams to a total of 21 points and only five assists over the first two games.  He’s not the only Buck that has struggled as Milwaukee has been held to a 37.4 shooting percentage from the floor so far in the series.

The teams played Monday and the Bulls are looking good tonight as they’re 6-1 ATS in their last seven games playing on two days rest as well as 4-0 ATS in their last four games overall. The Bucks on the other hand are a lowly 2-6 ATS in their last eight games versus a team with a winning S.U. record and they’ve covered the spread in only three of the last 13 meetings with the Bulls in Milwaukee.