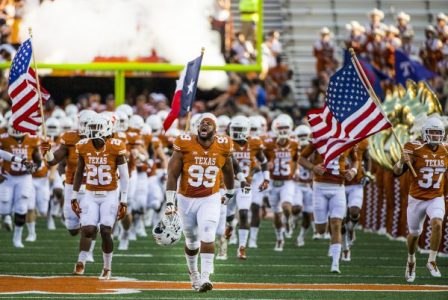 Published October 8, 2016. Check out our Featured, News for similar articles.

Week 6 of College Football and we have plenty of high profile games to look forward to. Take advantage of our expert College Football Free Picks to MAKE YOUR BOOKIE PAY FOR YOUR WEEKEND PLEASURES!

The rivalry continues. Texas won last year as a double digit dog and they are a double digit dog again! Won’t some people learn that in games like this you can throw out the record books. I do not care what Texas did last week at Okie State, because frankly OU has played 2 good teams this year and lost to both of them in butt kicking fashion, yet they warrant a laying a big number in this game? What has Oklahoma done to deserve this honestly, and you can bet Charlie Strong and his team, whose back is against the wall, know they are being disrespected in their home state in what usually is the biggest game of the year for Texas, now that Texas AM is in the SEC. I can smell the cotton Candy in the Texas State Fair air as well as the stench in this Las Vegas line.

Oklahoma has weapons on offense but so does Texas and the Horns can flat out run it down your throat. Both teams will score and score often in this game (total at 73), and with Texas they are putting up 568 yards a game, can you say backdoor cover? The Hook em Horns have covered 3 straight in this heated series, and I see no reason why they do not here given the generous points.

Free Play on Texas in the Red River War

** I have a $10 a Play Triple Header Saturday as well as another Hidden Gem small conference game, and my Gems are 80% YTD! A bounce back Saturday and a 5 Play Bonus Card Sunday in the NFL. I slipped last week, redemption is mine this weekend!

Big game here for Army as they come in 3-1 and they are playing Duke who is 2-3. Virginia who is a bad team easily beat Duke at Duke and a’lot of that had to do with Duke’s letdown off beating the Irish at Notre Dame. Army is off a bye week and a loss in OT to Buffalo Army is a much improved team and will be hungry to get a win Saturday. Last year Army fell to this Duke team 44-3 and there is no reason to think they will not be out to really avenge that loss and not get beat. Since 1979 rested .666 or better teams and are underdogs off an upset loss as a 9-point or more ATS favorite have covered at a money making 72%. Only 38% of the Public are backing Army here but I think they pull off the upset here but we will gladly take the points. 15* Army*****Be sure to pick up my 20* Non* Conference Goy forsale on my homepage***

Jim Feist
Alabama vs. Arkansas
Under 49

Reason: Your free play for Saturday, October 8, 2016 is in the College Football scheduled contest between Alabama and Arkansas of the SEC.
A pair of offenses that like to run the football, which chews up yards and the clock. Bama senior defensive end Jonathan Allen has been superb with four sacks on a star-studded defense that includes senior safety Eddie Jackson (nine career interceptions) and senior weak-side linebacker Reuben Foster (team-best 35 tackles).

Play Alabama/Arkansas Under the total.

These are our Top 10 College Football handicappers as we enter Saturday
(Friday’s results not included).

As an old sage once said “No brag, just fact”.

He’s got four plays and a freebie selection on today’s card. Get ready to win big today!

Mike Lundin has THREE COLLEGE FOOTBALL WINNERS lined up for Saturday with starting times of 12 PM EST, 7 PM ESTand 9 PM EST. He was PERFECT with his CFB play last weekend and you’re GUARANTEED to see this package turning a profit!

Jim Feist is 9-3 the last two weeks with his Saturday College Football 3-Packs. He unleashes 3 college football games in 1 pack, 3 sides, including a 10-Star Situational Slam. Turn a triple play of your own with Jim’s College Football Bookie Busting 3-Teamer and end your Saturday in the Winner’s Circle 3 times!

Get a FREE Week of Picks from our in-house handicapper Mike Lundin!

3. Send an email to info@professionalsportpicks.com) with your account number and the amount of your deposit!

Please note that it will take approximately 48 hours to verify your account!