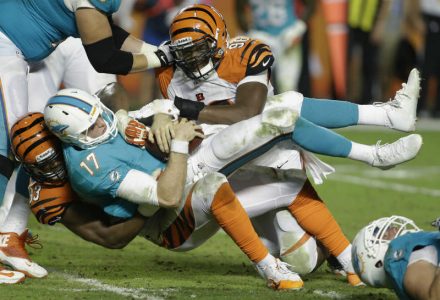 Miami took an 11-point lead early in the fourth quarter against the Browns last week but allowed its opponent to come back and force overtime. The Dolphins were very fortunate to walk away with the OT win as Cleveland missed a potential 46 yard game-winning field goal with no time left on the clock. Ryan Tannehill had a decent game under center and went 25-for-39 passing with 319 yards and three touchdowns, but was also picked off twice. He has already thrown four interceptions through three games on the season.

Cincinnati opened the season with a 23-22 win at New York Jets, but it has dropped back-to-back games since. Its defense could not contain Denver’s rookie QB Trevor Siemian (four touchdowns) in last week’s 29-17 loss while Andy Dalton was held in check by the Broncos D throwing for just 206 yards with zero touchdowns and one interception. He did not get much help from his offensive line and was sacked four times, something he might be used to by now as he’s been sacked a whopping 12 times already this season.

Both teams are coming off disappointing performances, and this is too many points for the Bengals to give up to any team right now.