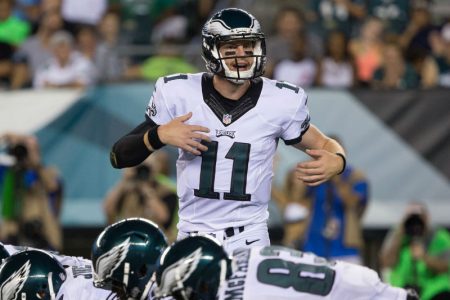 The Chicago Bears are looking to bounce back from a 23-14 road loss to the Houston Texas in Week 1 as they host the Philadelphia Eagles Monday night. The visitors claimed a 29-10 win over Cleveland at home in their season opener.

The Bears opened as a -2.5-point favorite but are now a -3.5-point favorite as we approach game time. That is despite a majority of the money (close to 60 percent) coming in on the visitors. This would indicate that even though a majority of the tickets are on the Eagles, the big tickets are backing the Bears. The total has remained steady around 42 points but the over is the popular bet for the public so far.

The Eagles covered the spread of -4 with ease in their win against Cleveland in Week 1. The No. 2 overall pick out of North Dakota State, Carson Wentz, had a huge debut under center going off for 278 yards passing and a pair of touchdowns. Philly has won five consecutive games with the preseason included and it’s 4-1 ATS in its last five Monday games.

Chicago failed to cover the spread of +5.5 points in its nine-point loss at Houston last week. The Bears offensive line struggled to protect quarterback Jay Cutler who was sacked five times, and Chicago’s defense allowed Houston to control the ball for more than 36 minutes. On a positive note the Bears are 9-1 at home versus rookie quarterbacks since 2001, so perhaps they can do a better job on Wentz, and the team is 4-1 ATS in its last five Monday night games.

Wentz is due for a let down game after a successful debut and the Bears will be ready to roar at home.