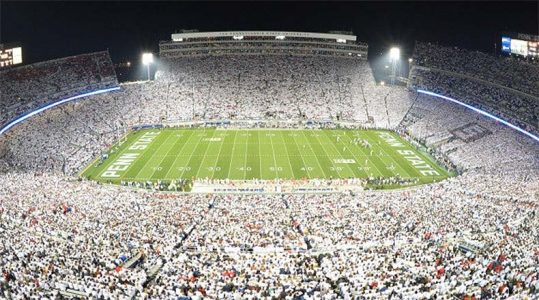 I know the Wolverines have righted the ship with 3 straight wins since that ugly 35-14 loss at Wisconsin, but two of those were against the two Big 10 bottom feeders in Rutgers and Illinois. The other was a 10-3 win at home against Iowa in a game they probably lose if the Hawkeyes take better care of the ball.

Wolverines have not shown they can pass the ball against good teams and that’s a problem cause the Nittany Lions defensive line is the real deal. They are 3rd in the country against the run, giving up just 53.8 yards/game.

This is a night game and will be Penn State’s white out game, which they have really thrived in, especially against the number. Nittany Lions are 5-1 ATS in their last 6 and have covered 3 straight. Give me the Nittany Lions -8.5!

If you are looking to cash in on the college gridiron this weekend, get your hands on SATURDAY’S WEEK 8 CFB 7-PACK!

Act now and you get this package for the low price of $59.95. You are GUARANTEED A WINNING PACKAGE or you get Lee’s next NCAAF card for FREE!