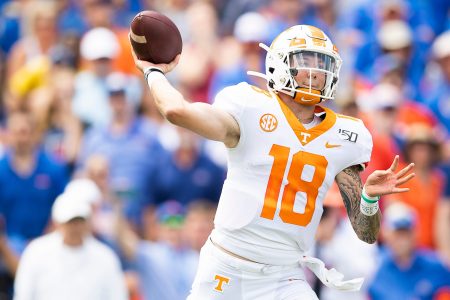 The Tennessee Vols were impressive last week.  They only trailed a national title contender in Georgia by 15 late in the fourth quarter. I realize the Bulldogs tacked on two touchdowns late, including a defensive score, but that game has to have given this team some confidence.

Now the Vols take a big step down in class against a Mississippi State team that has been very disappointing.  Their three wins have come against Lafayette, Southern Miss and Kentucky, and none of them were blowouts. They also lost at home to Kansas State, a K-State team that has gone on to lose badly to both Oklahoma State and Baylor.  And they lost by 33 at Auburn, an Auburn team that was just exposed last week by Florida.

The Vols will be going with a new starting QB this week, and that should give them a spark.

The Vols are 4-1 ATS in the last five meetings.

Come bet with the most consistent winning college football capper in the industry this weekend and sign up for my Saturday All-Inclusive NCAAF 9-Pack for $49.99! This card features FOUR 5 Unit BEST BETS in the Penn State/Iowa (ABC), USC/Notre Dame (NBC), Florida/LSU (ESPN) & Washington/Arizona (FS1) National TV games tonight! You pay *ONLY $5.56/Play* for all 9 winners, and you are GUARANTEED-to-PROFIT or I’ll send you Sunday’s NFL plays for FREE!