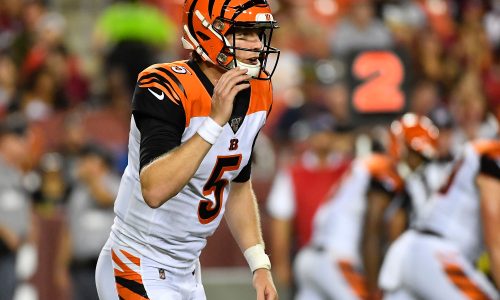 When it comes to the NFL, it’s not who you play but when you play them. That’s what we have in this matchup – a winless Bengals team against a Ravens squad that just knocked off previously unbeaten New England and who has seized control of the disappointing AFC North Division.

The Bengals can’t stop the run, nor can they run the ball. Now benched Andy Dalton has their only three rushing touchdowns. Is that a concern? Oh, yeah, a big one. But there are enough factors, history, and intangibles that point to the Bengals covering as this big of a home ‘dog.

Let’s start with the spot. It’s great for Cincinnati, terrible for Baltimore.

The Ravens are sitting on top of the NFL world after their best performance of the year, a 37-20 dismantling of the Patriots last Sunday. It’s going to be difficult for them to reach that sky-high motivation and “A” game level a second straight week playing a winless team on the road even if that team is in their division.

Baltimore has a terrible track record in these spots. Just twice during the past 13 times have the Ravens covered as favorites. They are 1-4 as chalk this season with the lone cover occurring opening week against the Dolphins. Teams who just played the Patriots are 1-7 ATS the following week. There is more: The Ravens are 1-7-1 in their last nine AFC North games. Baltimore is 1-6 SU, 2-5 ATS during its last seven trips to Cincinnati.

The Bengals have played three probable playoff teams close losing to the Seahawks, Bills and Ravens by a combined 11 points while covering each of those games.

Cincinnati is off its bye. The Bengals won’t have A.J. Green yet, but could get back their best offensive lineman, left tackle Cordy Glenn.  There should be a lot of energy coming from the Bengals. Dalton finally is benched after eight years of maddening mediocrity.

Ryan Finley could bring a spark. He has accuracy and poise. Zac Smith was hired to coach up the Bengals offense. Here is his chance. His job could be on the line already if the Bengals come out stale here. Cincinnati has decent wideouts even without Green and speedster John Ross. Joe Mixon led the AFC in rushing last season. He is way overdue for a big performance.

(Editor’s note: Stephen Nover is one of the top NFL ‘cappers in North America going for his 24th winning NFL season in the last 26 years.

Don’t miss any of Stephen’s plays, including his NFL November Total of the Month and his Monday Night Game of the Year.)