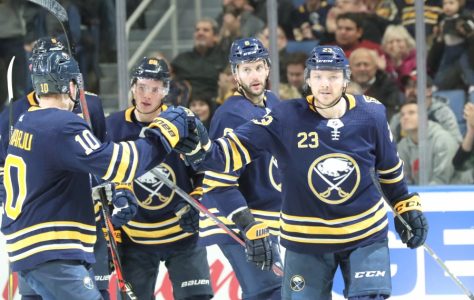 The Sabres go for a fourth consecutive win after beating up the Dallas Stars 4-0 on Monday. Buffalo was outshot in the game 25-22 and only managed to win 21 of 49 faceoffs. Still, they got the most important stat of the night, the win. They found the net on one of their two power-play opportunities while keeping the Stars scoreless both times Buffalo was forced to skate a man down.

On the season, Buffalo has been good for an average of four goals per game while holding their opponents to just 2.17. The Sabres are firing 31.3 shots per night, giving up the same number to their opponents. They have nine goals on the power-play for 42.9%. They have been able to build a 76.5% on the penalty kill.

The Ducks will be looking to bounce back from a 4-2 loss in Boston against the Bruins on Monday. Anaheim outshot Boston 32-23 and both teams were able to win 29 faceoffs. The Ducks were kept out of the net each of their four power-play opportunities. On the defensive end of the ice, they allowed the Bruins to score two of the three times Anaheim skated with a man in the box.

Anaheim has been able to score an average of 2.17 goals per game this season while holding the opposition to just 1.67. They are taking an average of 29.7 shots on offense while giving up 29.8. They have yet to score on a power-play and have a strong 84.2 penalty kill percentage of the year.

The Ducks allowed six goals in their five games before ending a four-game road trip with a 4-2 loss at Boston and I’m not one to trust that they’ve fixed what’s broken quite yet. I need to see more.

Some trends to consider. Buffalo is 5-1 in the previous six games following a win and is 4-1 last five after allowing 2 goals or less in the previous game. On the other side, Anaheim is 0-5 previous five vs. a team with winning % above .600, and are 3-10 in their previous 13 vs. the Atlantic Division.

Back Buffalo on the ML.