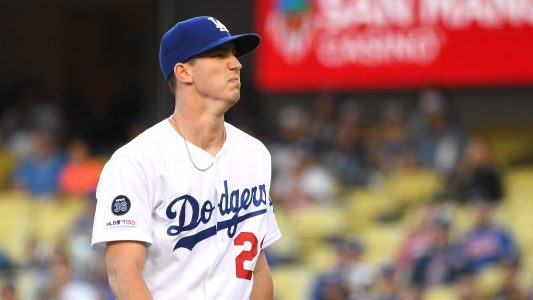 The Los Angeles Dodgers will host the San Francisco Giants for the middle-game of a three-game series at Dodger Stadium on Tuesday, June 29, 2021.

The Giants have a solid 50-28 record, good for first place in the National League West, 2½ games ahead of second-place LA Dodgers. While the Giants have picked up the majority of their wins at home, 24 of their 50 wins have come on the road.

They had won five in a row before closing out last week with a 6-2 loss at Oakland followed by a 3-2 loss to the Dodgers on Monday.

The Giants are averaging 4.97 runs per game (7th) with a .242 batting average (10th) and a .759 on-base percentage (4th). They average 1.50 home runs per game which is the second best mark in the major leagues, but they’re also striking out fairly often.

Tonight’s starter Kevin Gausman has an 8-1 record with a 1.49 ERA and a 0.77 WHIP while averaging 6.1 innings per outing. This looks like it’ll be the veteran’s best season ever. In his last start, Gausman held the Angels to one run on four hits and nine strikeouts in seven innings of a no-decision at LA Angels. The Giants won the game 9-3.

The Los Angeles Dodgers are coming into this contest with a 48-31 record overall and a 27-13 record home at Dodger Stadium.

They’re riding a four-game winning streak after closing out last week with three straight wins against the Cubs at Wrigley Field followed by a 3-2 win against the Giants on Monday.

The Dodgers are averaging 5.11 runs per game (4th) with a.239 batting average (12th) and a .748 on-base percentage. Neither their home-run or strikeout per game averages stand out in either direction.

In his last start, Buehler surrendered three runs on five hits and two walks with six strikeouts in a 4-0 loss to the Cubs. He had won six straight decisions prior to that outing and the Dodgers have won seven of his last 10 starts.

The Dodgers’ bullpen has a 14-13 record and 27 saves on 43 save opportunities in 2021. The Dodgers’ relieves combined 3.64 ERA ranks ninth across the major leagues.

Our models suggest that the value is on Los Angeles Dodgers in this matchup.

Gausman is 1-1 with a 3.51 ERA in five career appearances, four starts, at Dodger Stadium while Walker Buehler comes in 5-0 with a 2.51 ERA over 43 innings of work (nine appearances, seven starts) against the Giants.