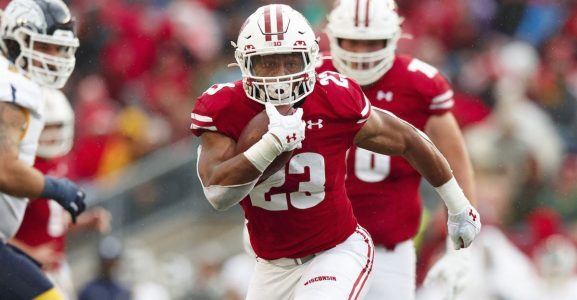 Saturday’s meeting in Columbus between Wisconsin and Ohio St was expected to be a showdown between two unbeatens, both ranked in the top-six in the AP poll.

However, the Badgers got ‘ambushed’ at Illinois last Saturday, losing 24-23 as a 30 1/2-point favorite. Yes, Wisconsin’s stunning loss at Illinois last week stole some of the thunder from this week’s matchup, although it could still be a preview of the Big Ten’s championship game. Then again, maybe Penn St an/or Minnesota could have something to say about that.

Wisconsin’s defensive numbers speak for themselves (see above) and had been nearly invincible before last week, posting four shutouts in its first six games.

Ohio St knows more than a little about defense as well, ranking second to Wisconsin in all the above-mentioned categories, except for rushing D (93.9 YPG ranks 9th). J.K. Dobbins (947 rushing yards on 7.1 YPC with 7 TDs) may not quite be Taylor, but he’s pretty close.

Ohio St does have an edge at QB though, as Justin Field is completing 70.7% for an average of 213.1 YPG with 22 TDs and just ONE interception. He’s also added EIGHT rushing TDs. Ohio St’s offense is averaging 49.7 PPG (3rd), 10 points more than Wisconsin’s 39.7. Ohio State has done little (NOTHING?) wrong in its first seven games this season and Wisconsin is expected to provide the biggest challenge to date for the Buckeyes.

Will there be any negative lingering effects from last Saturday’s stumble? Maybe the loss will be a motivation factor. Believe in karma? Ohio St was 70 -and ranked No. 2 last year about this time when Purdue took beat them 49-20. Of course, that contest wasn’t played in “The Horseshoe.”

Still, Im taking the two TDs with the nation’s No. 1 defense coming off an improbable loss.