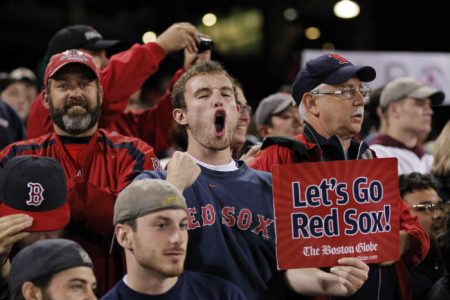 Free MLB Pick Red Sox vs. Indians from Fenway Park, Boston, Massachusetts on Sunday October 9. The Indians hold a 2-0 lead in the series after a pair of 5-4 and 6-0 wins home at Progressive Field and they could book their ticket for the American League Championship Series with another win tonight.

That won’t happen just yet if we are to believe the bookmakers and the betting public as the Red Sox opened as a -135 favorite and is now at -140. Backing the Indians would pay you +130. The total is set at 9 1/2 with most of the wagers coming in on the over, despite the fact that the under is 4-1-1 in the last six meetings.

Tomlin was briefly demoted to the bullpen, but injuries to the Tribe’s pitching staff has given him a chance to redeem himself. The 31 year old finished the regular season strong with a 1.75 ERA in his final four appearances. He is 2-3 with a 5.49 ERA in seven career games (six starts) against Boston but came up with a quality start in a tough-luck loss Aug. 15.

Buchholz was exiled to the ‘pen on three different occasions, but was sharp down the stretch. The 31 year old right-hander surrendered just three runs and 11 hits in 19 innings over his final three regular-season starts. He is 2-2 with a 4.85 ERA in seven career starts against Cleveland and conceded a combined nine runs (eight earned) and seven walks in 10 innings of work against the Indians this season.

The Red Sox won the regular season series 4-2 and the Indians are 1-4 in the last five meetings in Boston so perhaps there’s still hope for the Red Sox.

Both starters pitched well down the stretch, so we’re gonna go with the under for this free MLB pick Red Sox vs. Indians.