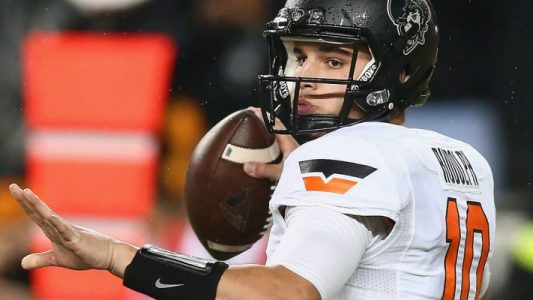 The Sooners opened as a 13.5-point favorite at market-setting sportsbooks 5Dimes and Pinnacle, but close to 80 percent of the tickets are backing the Cowboys moving the spread to Oklahoma -11. The total has dropped to 76.5 from the opener of 78 despite bettors favoring the over to the tune of 60/40.

The 9-2 Cowboys have won eight straight games and covered the spread in four of their last five. They’re coming off a 31-6 upset as a 6.5-point underdog at TCU on Nov. 19, a game where QB Mason Rudolph completed just 17 of 34 passes for 207 yards. Rudolph did however run in a couple of scores and the ground game was outstanding with Justice Hill and Chris Carson combining for a total of 300 yards.

Oklahoma State averages 40 points per game on offense this season while putting up 500 total yards of offense. They’ve allowed 27.2 points per game while holding opponents to 441 yards.

The Cowboys are 4-0 ATS vs. a team with a winning record and 10-1 ATS in their last 11 games after accumulating more than 200 yards rushing in their previous game. Over is 4-1-1 in Cowboys last 6 games following a bye week and 11-3 in their last 14 conference games.

The 9-2 Cowboys have won each of their last nine games, all of the last five by double-digits. They’re coming off a 56-28 win as a 3.5-point favorite at West Virginia on Nov. 19, but were actually outgained 579-485 in total offense.

Sooners quarterback Baker Mayfield owns 35 scoring passes along with six rushing TDs on the season but completed only 9 of 15 passes for a total of 169 yards, a pair of touchdowns and an interception in that contest. Oklahoma piled up 316 yards on the ground with Mayfield running for a pair of the teams total five rushing TDs in the game.

Oklahoma won last season’s meeting 58-23, but we expect a much  closer rivalry game this time around.