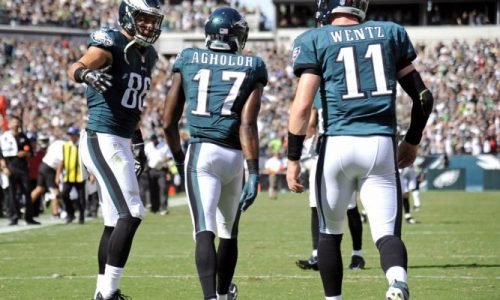 The 5-5 Philadelphia Eagles will host the 4-6 Green Bay Packers in an all NFC clash on Week 12 Monday Night Football. The game has an 8.30 PM ET start and will be broadcast nationally on ESPN.

The Eagles opened as a 3.5-point favorite with the total set at 47. We have seen the line fluctuate between Eagles -4 and -4.5 on Vegas and off-shore sports books as of Monday morning while the total has gone up a full point to 48. The tickets are coming in evenly on the two sides while 80 percent of the tickets are backing the over, despite the fact that the under is 6-1 in the last seven meetings.

The Packers have lost four games in a row and their defense has been carved up for a total of 89 points at Tennessee and Washington in the two most recent setbacks. They are still only two games shy of a tie atop the NFC North standings but they really need to step it up defensively to challenge Minnesota and Detroit who both are ahead of them in the division.

Quarterback Aaron Rodgers ranks eighth in the NFL in passing yards and threw for 351 yards and three scores in a 42-24 loss to the Redskins in Week 11. The star QB seems confident that the Packers can turn it around. “I feel like we can run the table, I really do,” Rodgers said. “You just feel like it just takes one (win). We get one under our belts, things might start rolling for us and we can run the table.”

The Eagles have dropped five of their last seven after a red hot 3-0 start to the season. They’re still 4-0 straight up and against the spread home at Lincoln Financial Field. The Eagles fell 26-15 at Seattle last week as Carson Wentz was picked off twice. The rookie quarterback threw for just 218 yards and two touchdowns on 45 attempts, but considering the Packers are giving up 265.6 passing yards per game Wentz seems to have a favorable matchup here.

Teams have really struggled to score when visiting Philadelphia this season with the Eagles allowing just 9.5 points per game. The opponents have been Cleveland, Pittsburgh, Minnesota and Atlanta, and the Packers should prove a tougher test for the Philadelphia D tonight.