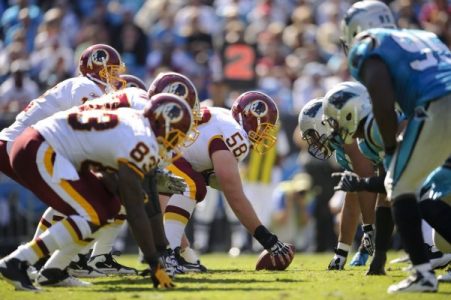 The 5-8 Carolina Panthers pay a visit to the 7-5 Washington Redskins at FedEx Field, Landover in Maryland Monday night. The Panthers are three games out of the final playoff spot in the NFC with three to play while Washington trails Tampa Bay by one-half game for the sixth seed in the NFC. The game will be televised on ESPN with a start time of 8:30 pm EST.

Vegas odds currently have the Redskins listed as 7-point favorite, while the total has been set at 50.5 points. We have seen a huge line movement on the spread which opened with Redskins as a 4.5-point favorite, and the move is especially notable considering the tickets are coming in at only 55/45 in favor of Washington.

The Panthers are coming off a 28-16 win against San Diego, but they have virtually no shot at making the playoffs. Cam Newton hasn’t been himself all season and ranks just 24th in the NFL in passing yardage, but perhaps the Carolina QB can up his game here as Newton has seven touchdown passes and zero interceptions in his previous three meetings versus Washington.

The Panthers D that carried them to the Super Bowl last season ranks 23rd in total yards allowed, 30th against the pass, 5th against the run and 26th in points allowed this season while surrendering 25.9 points per game. Carolina has some serious defensive woes with linebackers Luke Kuechly and David Mayo questionable with concussions, and with the season already all but lost the Panthers might opt not to risk the duo in this contest.

The Panthers have been particularly poor on the road, going 1-5 straight up and 1-4-1 ATS, and they’re 1-8-1 ATS in their last 10 road games last season included. Their defense had been carved up for 75 points in losses at Oakland and Seattle prior to beating San Diego at home last week. Coming off a win might not help the Panthers though as they’re 1-4-1 ATS in their last six games following a straight up win while the over is 8-1 in the Panthers last nine road games vs. a team with a winning home record.

The Redskins will be happy to return home as they’ve dropped two of their last three contests by single-digit margins on the road, but they defeated a division rival in the Eagles 26-22 at Philadelphia last weekend.

Washington is 4-2 straight up and against the spread in front of the home fans at FedEx Field this season and Kirk Cousins is having a terrific year, throwing for 4,045 yards already, good for third in the NFL. The Skins come in ranked 2nd in total offense, 2nd in passing, 13th in rushing and 8th in scoring, putting up 25.4 points on the board on average. On the defensive end Washington comes in ranked 26th in total yards allowed, 24th against the pass, 22nd against the run and 22nd in points allowed, surrendering 24.4 points per game.

The Redskins are 8-2 ATS vs. a team with a losing record but just 1-5 ATS in their last six Monday night games. The over is 8-0 in Redskins last eight home games and 11-2 in all Washington’s games this season.

The Redskins will come to play in this must-win matchup and their first opportunity to play in front of the home town crowd since Nov. 20, a 42-24 win against Green Bay. Quarterback Kirk Cousins should be able to exploit the Panthers’ third-worst pass defense in the NFL. Carolina won last season’s meeting 44-16, and another high-scoring encounter is likely here, although the scoreline might be the reversed this time around.