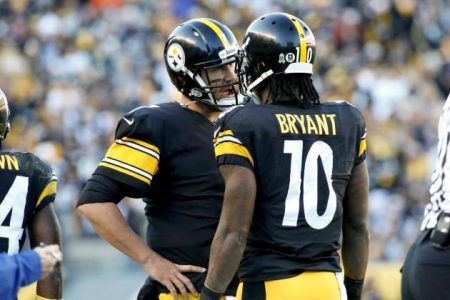 The Washington Redskins have high hopes for the new season following their surprise run to the NFC East title in 2015. The Pittsburgh Steelers will be looking to make it to the playoffs once again after finishing second in the AFC North with a respectable 10-6 record, good enough to clinch a wild card.

The line opened at Redskins +2.5 which is still the case heading into Monday, despite 65% of the money coming in on the visitors. The total has dropped a bit from the opener of 51 points but has held steady in the 49.5-50 range.

Pittsburgh will be without a pair of key weapons as running back Le’Veon Bell is serving a three-game suspension and wide receiver Martavis Bryant is out for the year for violations of the league’s substance abuse policy. Steelers wide receiver Antonio Brown figures to be the target for most passes from two-time Super Bowl-winning quarterback Ben Roethlisberger, but he’ll be in for a tough matchup against Pro Bowl cornerback Josh Norman. The Steelers defense ranked 30th against the pass last season and Redskins quarterback Kirk Cousins became the first quarterback in franchise history to throw for at least 4,000 yards and 25 touchdowns last year.