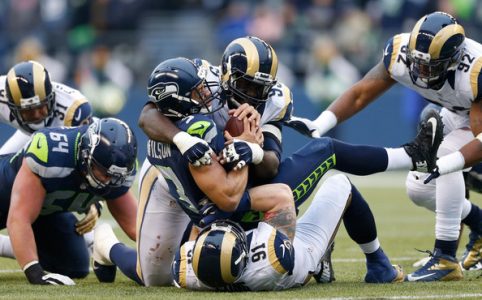 The 4-9 Los Angeles Rams will visit the 8-4-1 Seattle Seahawks in a matchup between to NFC West foes on Thursday Night Football in Week 15 of the NFL.

Neither team managed to score a single touchdown when the Rams defeated the Seahawks 9-3 in a real snoozefest on Sept. 18, and we could see another low-scoring affair in this contest.

The total opened at 40.5, but money has poured in on the under moving the line to 38.5 as of the publication of this Rams vs. Seahawks Free Pick. That is despite nearly 73 percent of the money backing the over, so that’s a reverse line movement to take into consideration.

Seattle opened as a 14-point favorite, but that has not deterred spread bettors one bit with 74 percent of the tickets on the Seahawks moving the line to -15. You can follow the line movement and public betting percentage on our Live Betting Odds & Lines page.

The Rams have lost four straight games without covering the spread even once. They were embarrassed at home on Sunday by Atlanta, losing 42-14 and rookie quarterback Jared Goff had a disastrous performance, which included two interceptions. The Rams have been held to 14 points or fewer three times during the skid, and the poor results have led to the firing of head coach Jeff Fisher. Special teams coach John Fassel will take charge of the Rams for the time being.

On the positive side, the Rams are 7-1-1 ATS in their last nine games following a double-digit loss at home, but they’re just 2-7 ATS vs. a team with a winning record. Under is 9-0 in the Rams last nine games after allowing more than 30 points in their previous game.

The Seahawks are coming off a humbling defeat of their own as they fell 38-10 to the Packers at Lambeau Field last week. Russell Wilson was just 22-of-39 passing and threw a career high five picks in the defeat, that against a Green Bay defense that had just eight interceptions on the season. Wilson and the Seattle offense will have to be wary of Alec Ogletree who ranks fourth in the NFL in tackles (117) and recorded nine along with a forced fumble and fumble recovery in the first meeting with Seattle.

The Seahawks rank third in the NFL in points allowed per game (17.8 ppg) and eighth in total yards per game allowed (330.2 ypg).

Under is 7-2 in the last nine meetings overall and 4-0 in the last four meetings in Seattle while the home team has covered the spread in six of the past seven meetings.