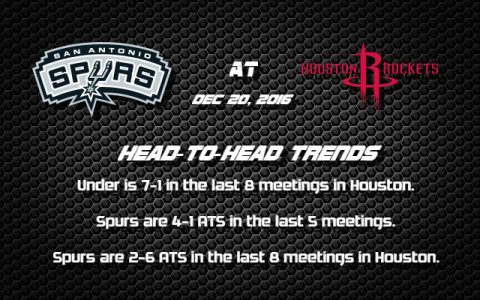 The San Antonio Spurs have the 2nd best record in the league at 22-5. They have won eight of their last nine games, including four in a row, and they lead the Southwest Division ahead of the Houston Rockets who are right behind them at 21-7 and having won 10 in a row.

Our expert handicappers Bob Harvey and Jack Jones will give you two different takes on the game.

The Houston Rockets go for their 11th straight victory when they host the San Antonio Spurs. The two Texas Teams square off at 8 PM ET at the Toyota Center where Houston is favored by -1. The total is 214.5.

The Spurs (22-5, 14-12 ATS) have won four straight contests and 17 of their last 19. San Antonio is an NBA-best 14-1 on the road as it opens a three-game road trip that includes games against the Los Angeles Clippers and Portland Trail Blazers. The Spurs averaged 114.5 points while winning their last four contests, including a 113-100 victory over the New Orleans Pelicans on Sunday. Tony Parker has posted double-digit scoring totals in each of the past four games and San Antonio is 10-0 this season when he scores 10 or more points.

Despite their lengthy winning streak, the Rockets (21-7, 19-9 ATS) remain 1.5 games behind the Spurs in the Southwest Division. Houston has joined the NBA craze of shooting three’s. It connected on 17 3-pointers in the victory over Minnesota to extend a of couple NBA records — five consecutive games with 15 or more 3-pointers and 27 straight contests with 10 or more.

The Rockets are 8-0 ATS in their last eight games following an ATS loss. Houston is 13-3 ATS in its last 16 vs. the Western Conference.

The Spurs are 5-0 to the UNDER and 7-1 to the low side in the past eight games in Houston.

The Rockets are 7-0 to the UNDER in their last seven against the NBA Southwest and 4-1 vs. the Western Conference.

The San Antonio Spurs are well-rested and ready to go tonight.  They will be playing just their 2nd game in 5 days and will give the Houston Rockets their best effort.  That’s especially the case after a couple of hard-fought battles with the Rockets already this season, and their hunger to put an end to Houston’s current 10-game winning streak.

The Rockets’ streak should have come to an end at Minnesota on Saturday, but they managed to overcome a 13-point deficit entering the 4th quarter to win 111-109 in overtime.  I don’t think the Rockets will be as fortunate this time around against this Spurs team that is 22-5 overall, including a sensational 14-1 in road games.

Houston has an injury here that is getting overlooked.  Clint Capela is the glue guy for this team as he does all of the dirty work inside, but he suffered a broken fibula in the game against the Timberwolves.  He averages 11.8 points, 8.0 rebounds and 1.6 blocks per game.  The Rockets are already a perimeter-oriented team, but they will be even more so moving forward without him.  Look for the Spurs to punish the Rockets in the paint in this game.

The Spurs won 106-100 in Houston earlier this season.  They are now 4-1 SU & 4-1 ATS in the last five meetings in this series.  The Rockets are 0-5 ATS in their last five games when playing on two days’ rest.  San Antonio is 42-23 ATS in its last 65 games vs. poor defensive teams who allow 103 or more points per game on the season.  Bet the Spurs Tuesday.

Jack Jones has put together an EPIC 28-10 Run L10 Days on all premium plays! That includes a 17-5 Run L5 Days and he has shown a profit w/ 9 of his L10 cards heading into tonight’s action!

This money train stays right on track with Jack’s Tuesday 5-Play Power Pack for $49.95! This card features 1 CFB, 1 CBB & 3 NBA winners for you to feast on today! Leading the charge is his 20* NBA GAME OF THE MONTH as he adds to his 13-2 NBA TEAR! He also has the winner of the Memphis/WKU bowl game!

Sign up and bet with confidence knowing you are GUARANTEED PROFITS or you’ll receive site credit for the amount of your purchase!