Home » Featured » The Curious Case Of The Not So Mighty Ducks

The Curious Case Of The Not So Mighty Ducks 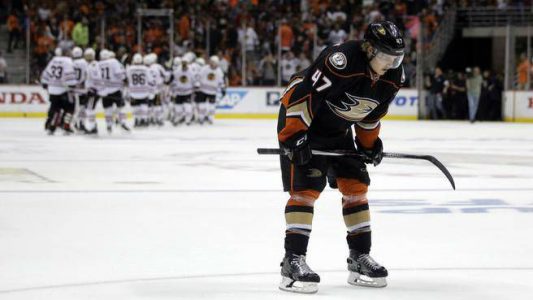 Are the Anaheim Ducks even aware the NHL season is underway yet? I, as many others, have the Ducks as one of the favorites to win the Stanley Cup this year, but right now that does not seem very likely. I would hold the Ducks as one of the worst teams in the NHL here in the first week and half of the regular season with four defeats in as many games.

What’s worrying is the way they’ve lost, mainly the last two games. The offensive does not click at all, which becomes clear when you realize that the Ducks have found the net just once over the first four games. The second lowest-scoring team are the Kings who at least have mustered four goals. Let’s take a look at their performances so far.

Ducks @ Sharks. 0-2
Hardly anyone can argue that the right team won here. The Sharks were the better team by a mile and outshot the Ducks 44-27. Martin Jones got a fantastic start as the Sharks first choice in net and Patrick and Marleau was deservedly named the first star of the game after scoring both goals for the Sharks. However, I don’t think the Ducks were all that bad in this game, but, as usual, they faced a superior opponent in the Sharks (Sharks won four of five games between the teams last season).

Canucks @ Ducks. 2-1 SO
A game one could argue that the Ducks could and should have won. They outshot the Nucks and were the better team throughout the game in my opinion, but were very inefficient at the decisive moments. One must also give credit to Ryan Miller, who has started the season very strong, and robbed Perry on his penalty shot which determined the shootout. In retrospect, this game set the tone for the upcoming games, if the Ducks had won here they would have carried a very different momentum with them into the next game.

Coyotes @ Ducks. 4-0
A match that all Ducks, and Anton Khudobin in particular, would like to forget. There is not much to say really. After 12:53 of the first period Khudobin was replaced after conceding three goals on just eight shots. Fredrik Andersen stepped in and brought more confidence to the team, but given how badly the Ducks struggle to score at the moment the gap was just too big and they were blanked in yet another game.

Avalanche @ Ducks. 3-0
Now we can start talking about a crisis. Shutout for the third time in four games, despite winning the shots with 35-25. The game itself was a rather one-sided affair and the final goal came in an empty net. The only positive is that the Ducks started taking more shots instead of trying to pass it all the way into the goal.

Upcoming Schedule for the rest of October

That’s a really tough schedule and I think we’ll get plenty of opportunites to go against the Ducks in their upcoming games this month. I also expect to bet a couple of games to go under the total until the Ducks can prove that they know how to find the net again.