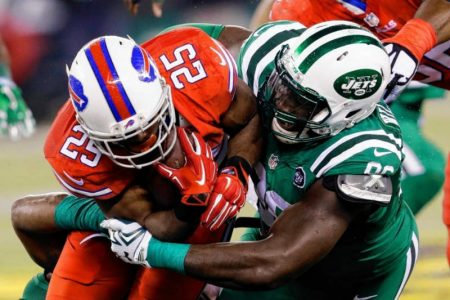 Published September 14, 2016. Check out our Featured, Previews for similar articles.

Both the Buffalo Bills and the New York Jets will be looking to bounce back from defeats in the season premiere as the teams clash in an AFC East divisional battle here in Week 2.

The Jets opened as a 3-point underdog but the teams enter Thursday at a pick’em, with 59 percent of the money so far coming in on the visitors. The total opened at 42 but is now at 40, not all that surprising considering particularly Buffalo’s lackluster performance on the ball in its season opener.

The Bills struggled mightily on offense in week one when they found themselves on the losing side of a low-scoring game against the Ravens. Buffalo also failed to cover the spread as they finished a 13-7 loser after closing as a three-point underdog. Tyrod Taylor connected on 15-of-22 passes for just 111 yards in the game and LeSean McCoy couldn’t get anything going on the ground and the team was held to just 160 yards overall.

The Jets suffered a heartbreaking loss as a small home favorite against the Cincinnati Bengals to a last minute field goal. Their secondary looked suspicious as they allowed Andrew Dalton to throw for 366 yards (although they had seven sacks) while their own QB Ryan Fitzpatrick was 19-of-35 for just a total of 189 yards. The Jets are generally slow starters and just 2-6-1 ATS in their last nine games in September, but they’re 5-1-1 ATS in their last seven games in Week 2.

The last time the teams faced each other was on January 3 when the Bills posted a 22-17 victory over the Jets as a 2.5-point underdog and the Bills had also won by the same scoreline at New York less than two months earlier, also as a 2.5-point dog.