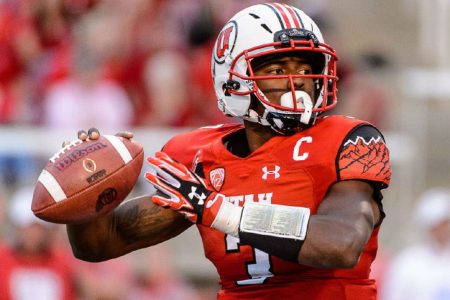 The USC Trojans are off to their worst start since 2001 with just one victory through their first three games. They’ve had a tough schedule though and the losses have occurred in visits at No. 1 Alabama and No. 6 Stanford. They’ll be looking to turn their fortune around when taking on the undefeated No. 23 Utah Utes for a Pac-12 clash at Rice-Eccles Stadium Friday night.

Utah opened at -1.5 points on September 18 but are now at -3 with close to two thirds of the public backing the home team. The total has held steady at 46.5 despite close to 60 percent of the tickets coming in on the over. The over/under is 1-2-0 for both teams on the season while each side have covered the spread in just one of their first three contests.

The Trojans coach Clay Helton was so frustrated with his teams offense in last week’s 27-10 loss at that he replaced starting quarterback Max Browne, a junior, with freshman Sam Darnold in the fourth quarter. Browne completed 18-of-28 passes for 191 yards with no picks, but also threw no TDs, while Darnold went 5-of-7 passing with an INT. The Utes delivered 10 sacks against San Jose State in their last game so don’t expect an upswing in USC’s offensive production just yet.

Utah is led by quarterback Troy Williams who is coming off a 20-for-28 performance last weekend against San Jose State, finishing with 257 yards and a touchdown. The L.A.-area product is one of two just Pac-12 quarterbacks with at least five completions of 40 yards or longer this season. Utah has split the carries between four running backs. Troy McCormick leads with 178 yards and two scores while Zack Moss adds 153 yards and one TD. Utah accumulated 201 rushing yards on 37 carries in a 34-17 win at San Jose State last week, and the team is 9-3 ATS last 12 after accumulating more than 200 yards rushing in its previous game.