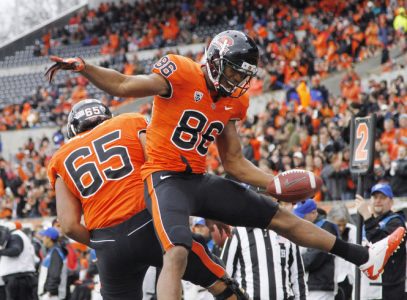 Reser Stadium can be a difficult place to play, especially at night. The fact that Utah is coming off a road win over UCLA and Oregon State barely squeaked by with a win at Colorado, and the books have the Utes listed as a mere 3-point favorite is a good indication that the experts are expecting Utah to struggle to leave Corvallis with a win.

This is actually a solid matchup for Oregon State, as Utah’s strength defensively is a physical front 7 that has held opponents to just 113.4 rushing ypg (20th). However, the Utes are 91st against the pass (263.4 ypg) and there’s no doubt the Beavers will be looking to spread them out and attack through the air. Oregon State is 47th in passing (260.8 ypg) compared to 101st in rushing (132.4 ypg).

The Utes are getting a lot of respect for wins at Michigan and UCLA, but neither of those programs are as good as we thought coming into the season. What really stands out to me is that Utah lost at home to an average Washington State team, which leaves little doubt in my mind that the Beavers can pull off the upset.

Oregon State comes in 28th in the country in total defense, allowing just 331.6 ypg. While some of that has to do with an easy schedule early, you don’t put up those kind of numbers without some talent on that side of the ball. With this being a nationally televised game against a ranked opponent at home, I look for the Beavers to play inspired defensively and get just enough offense to cover and win the game outright.

There is a solid system here telling us to fade the Utes. Road favorites off a win by 6 or less points who are averaging 34+ ppg against an opponent that is allowing 21 to 28 ppg are just 7-30 ATS over the last 10 seasons. That’s a 81% system in favor of the Beavers. Take Oregon State!

DOMINANT 24-12 (64%) Over L36 NCAAF 5* Top Plays! Jimmy Boyd is the #10 Ranked Handicapper Overall in 2014 and has been absolutely crushing the books with an Amazing 42-23 (65%) Run L65 NCAAF Over/Under Selections! If you are serious about cashing in big profit on Thursday’s college action, make sure you are on the same side as Boyd’s 5* Weekday NCAAF Total of the Year! You will be betting with confidence behind a Sizzling 77% System that leaves no doubt you are on the right side of this easy winner! You are GUARANTEED TO WIN or you will receive Jimmy’s next football card for FREE!