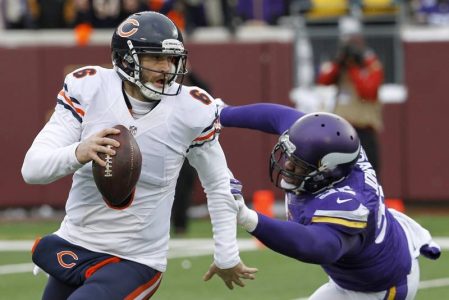 A pair of NFC North rivals will clash at Soldier Field in Chicago, Illinois Monday night when the Chicago Bears entertain the Minnesota Vikings. The Vikings won the last meeting 38-17 as a 4-point favorite home in Minnesota on December 20 last year. You can watch the game live on ESPN nationwide.

Minnesota suffered its first loss of the season (both straight up and against the spread) last week. The Vikings headed into Philadelphia coming off a bye week, but failed to make the most of their rest advantage as they fell 21-10 as a 3-point road favorite. They held the Eagles to just a total of 239 yards of offense, but the Vikings own offense was not much better with a total of 282 yardage. Quarterback Sam Bradford got exposed by his former team and was just 24-of-41 passing with a touchdown and a pick, one of a total of four Minnesota turnovers. The Vikings very much rely on a defense that is limiting foes to an NFL-low 14.0 points.

The Chicago Bears have just one win on the season and they’re coming into this game on the back of three consecutive defeats. They’ve failed to cover the spread in each of their five losses and were outgained by a total of 217 yards in a 26-10 loss at Green Bay in Week 7. Quarterback Brian Hoyer suffered a broken arm in the defeat and we’ll see Jay Cutler return to action under center for the first time in six games tonight. Bears running back Jeremy Langford could return from a sprained ankle that has kept him out for the past four games.

PREMIUM PICKS FROM THE BEST NFL HANDICAPPERS IN THE WORLD

Free Picks: 6.5-point teaser on Minnesota Vikings and Under.

The Vikings should be able to generate enough offense to beat the bad news Bears, but we don’t expect touchdowns to come easy for either side.