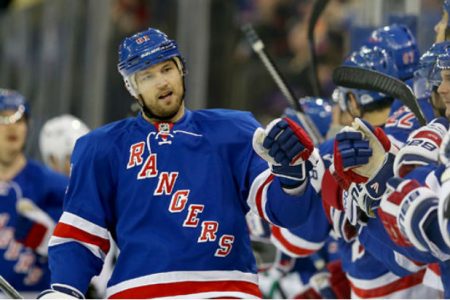 Published April 30, 2015. Check out our Featured for similar articles.

For the fourth time in five years and the fifth time in seven the Eastern Conference clubs and Metropolitan Division rivals the Washington Capitals and the New York Rangers are about to clash in the playoffs. The Rangers are looking to make a return trip to the Stanley Cup final, but If history is any indicator they’ll be in for a tough and long series here as the last two have gone seven games.

Washington Capitals (45-26-11)
The #4 seed the Washington Capitals defeated the #5 seed the New York Islanders in seven games in their quarterfinals series winning the tie-breaker 2-1 home at Verizon Center. Braden Holtby who started six of the seven games posted a 1.63 GAA with a .943 SV% in the series as he allowed just 10 goals on 176 shots. Washington under Barry Trotz is one the most defensively sound and disciplined teams in the NHL and held the Islanders to only 11 shots on goal in the crucial Game 7.

New York Rangers (53-22-7)
The New York Rangers finished the regular season top of the Eastern Conference and had little trouble getting past the #8 seeded Pittsburgh Penguins in their conference quarterfinals. Henrik Lundqvist showed no sign of the vascular injury that held him out for two months late in the season and held the Pens to just one goal in four of the five games and compiled a 1.54 GAA with a .939 SV% over the five games in the series. He had little trouble when facing Washington during the regular season winning both meetings with a 2.00 GAA.

Trends & Conclusion
The under is 4-0 in Capitals last 4 road games and 4-1 in their last 5 overall. The under is 4-1 in Rangers last 5 overall and also 4-1 in their last 5 vs. a team with a winning record. Only five of the last 28 meetings between the two clubs have gone over and we can expect a low-scoring contest at MSG to open this series at Madison Square Garden tonight.