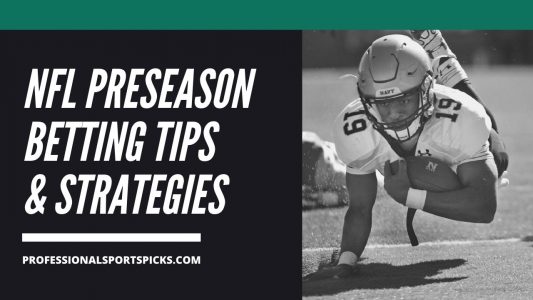 Thirsty for National Football League betting action??? The NFL is the biggest and most popular sport in North America, but many bettors shy away from betting on the NFL preseason (even after going nearly 30 weekends without a single football game to bet on). The truth is that done the right way, NFL preseason betting can be just as lucrative as betting on any other event. Learn how to bet the NFL preseason for a profit with our betting strategies and tips.

NFL preseason games obviously play out a bit differently than the regular season and playoff games. Read up on our top 5 NFL preseason betting tips that will have you better prepared than ever.

Betting Tip: 1:  Realize that Coaching is EVERYTHING

With makeshift squads and second-, third- and fourth-stringers on the field for the majority of the games, how do you even start handicapping an NFL preseason game? With the coaching staff of course. Most head coaches do not take the preseason seriously, but believe it or not, there are coaches in the National Football League who just loves winning games, whether it’s the Super Bowl or an exhibition game in Cincinnati. Don’t be surprised to see a team that you expect finishing with a losing record go 4-0 during preseason. Betting on coaches with historically successful preseason records is by far the easiest way to make money.

While coaching trends are key, ýou also do not want to bet a team bases on old merits. A team that was a defensive powerhouse last year might have lost several core players on the defensive side of the ball. That would obviously be a very different team coming into the preseason, and while we do recommend leaning on past trends, make sure they apply to the current roster.

There’s been a clear trend in recent years that the point spread rarely is a factor, which means that you’re potentially leaving money on the table by taking the points when betting an underdog. If you do like an underdog, bet them on the moneyline and collect that sweet plus-money when the dog barks.

In many cases, you will be getting an underdog price on what is essentially a coin flip. Underdogs often are built up of young players, and the head coach will be happy to give them extended time on the field in order to gain experience, unlike a team with a veteran core.

These are the guys likely to see a decent amount of action under center, and they’ll come into the preseason with a point to prove to their new fans and the coaches as they look to challenge for the starting position. Overall, any potential roster spot fight driving motivation is worth paying attention to, but quarterbacks, in particular, play a crucial role when it comes to winning an NFL game, and preseason games are no different.

Unlike the regular season, coaches will pretty much tell you their game plan and the amount of time the starters will be on the field for the upcoming game. Scour through as many news outlets as you can to stay up to date on matchups that pique your interest.

Let’s be clear; professional sports bettors will bet on just about everything as long as they have an edge, so why wouldn’t they bet on the NFL preseason? Bookmakers claim professional bettors often account for 50-70% of the money bet on a preseason game. “The handle is pretty sharp-concentrated on straight bets on the NFL preseason,” according to John Murray, sportsbook director at the Westgate SuperBook in Las Vegas.

Here at Professional Sports Picks, we have a roster stacked with some of the most successful NFL bettors in the world. How can we make such a bold claim? Because unlike many other handicapper sites, we have their NFL preseason records documented separately and we have separate NFL preseason handicapper leaderboards publicly available. We highly recommend signing up for a full-season subscription to one of our top NFL preseason handicappers as that will keep you in action from the Hall of Fame Game all the way through Super Bowl.

Where to Bet NFL Preseason Games

Our top 3 USA-friendly sportsbooks for NFL preseason odds and betting are Bet Any Sports, BetOnline and Bookmaker, due to their wide arrange of odds and bet types. Fast payouts and stellar reputations also do not hurt their cases as the most attractive sportsbooks for North American bettors.

We have two separate sections for our handicappers’ picks. First of all, we have their best NFL preseason bets, premium content that comes at a cost. The premium pick packages and all subscription options can also be found on the handicappers’ pages.

Then we have weekly Expert NFL preseason free picks that are available completely free of charge, and no sign-up is needed.

Is it Worth Betting on the NFL Preseason?

If you follow our betting strategies & tips, or simply subscribe to picks from one of our expert NFL handicappers, then yes, we do believe it’s worth betting on the NFL preseason. That being said, we would never recommend throwing around big money on a preseason game. so be sure to keep your emotions in check to ensure you’re in the game when the regular season rolls around.